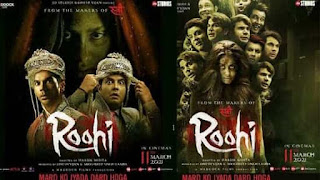 Rajkummar Rao and Jhanvi Kapoor starrer ‘Roohi’ has proved to be quite successful at the box office.  The film has earned in crores in the last 6 days.  After the Corona epidemic, Roohi Box Office Collection is the only film that has been able to make a strong collection at the box office.  It has proved to be successful with the tremendous acting of Rajkumar Rao and Jhanvi Kapoor, so it seems that now the good days of the box office are coming.  Theaters were closed due to the Corona epidemic, that is why important films were being released on the OTT platform, but now theaters have started again and the box office earnings of films are also about to reach the touch.

This film of Rajkumar Rao and Jhanvi Kapoor has done business of Rs 1.26 crore even on the 6th day of its release. After the corona infection, this time Ruhi has come as a gift at the box office.

Roohi 11 had earned 3.06 crores on Opening Day in March, along with the week holidays proved to be very helpful in earning this film.  The film did a business of 3.42 crores on Saturday.  And on Sunday, this film collected the highest collection of 3.85 crores.  On Monday and Tuesday, the film has done a business of Rs 1 crore, so it is expected that on Wednesday and Thursday too, the film will do business of Rs 1 crore.  In such a situation, it will prove to be the most successful film at the box office after the Corona period.

Roohi has so far done a business of Rs 15.19 crore in 6 days after the release date.

Viewers are reaching theaters to see this horror-comedy film.  After the Corona period, the audience has expressed a lot of love for this film.  However, most of the film’s earnings are still coming from multiplexes.  The atmosphere of the film on the single screen is not so special and still, the film’s earnings have been affected due to lockdown and corona in many states of India.

The real battle for Roohi will begin now:

This Friday, there is going to be a big competition for Roohi, on the 19th, two big films are going to be released in theaters.  Which is going to give a tough competition to Roohi.  Arjun Kapoor and Parineeti Chopra starrer ‘Sandeep Aur Pinky Farrar’ is releasing this Friday and John Abraham and Emraan Hashmi’s Mumbai Saga are releasing together.  A lot is being expected from both these films.  It is being estimated that it will do business of around 50 crores in the film.  Whereas for Roohi, it is being estimated that the film will be able to collect 30-35 crores for its lifetime.