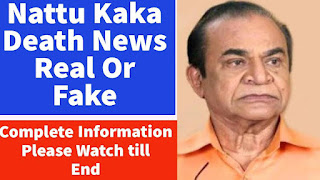 Who is Nattu Kaka Ghanshyam Nayak?

Ghanshyam Nayak (born 12 May 1944) is a veteran Indian film and television actor, who predominantly worked in several Gujarati films, Hindi films and TV shows.  He has also been a part of 100 Gujarati stage plays.

Tragic: 'Taarak Mehta' fame Natukaka passed away at the age of 77, was suffering from cancer for more than a year.

Ghanshyam Nayak was undergoing treatment for cancer for the last one year, amidst the treatment of cancer, the serial Taarak Mehta Ka Ooltah Chashma was shot.

'Tarak Mehta' fame Natukaka, who was battling cancer for the last one year, passed away at the age of 77.  77-year-old Natukaka i.e. Ghanshyam Nayak as 'Taarak Mehta Ka Ooltah Chashmah' was diagnosed with throat cancer in September last year.  At that time Natuka was in the hospital for 13 days and 8 tumors were removed in the operation.  After the operation, Natukaka underwent radiation and chemotherapy.  Recently, Natukka's son Vikas Naik talked about cancer in the media.

According to sources, the family members of Ghanshyam Nayak have left for Mumbai from Mehsana. 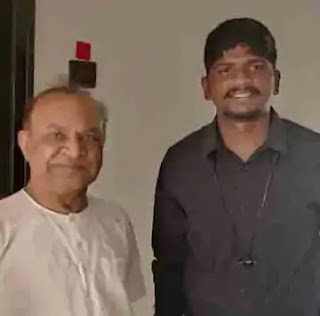 The test came six months after the operation

According to Vikas Nayak's Somedia post, Natuka had undergone cancer surgery in September last year.  This was followed by 30 sessions of radiation and five sessions of chemo.  Natuka's cancer treatment lasted till October.  After six months of treatment, Natukaka's stomach was examined.  In this test, Natukka once again found one or two spots on the neck where eight tumors were removed.  Not only this, one or two new suspicious spots also appeared in the lungs.  Doctors said that it was later diagnosed as the same site of cancer and would once again require chemotherapy.

Ghanshyam Nayak was 76 years old, so it was not easy for the chemo to hold the vein every time, which is why doctors suggested to put chemo parts in his body.  Ghanshyam Naik also had minor surgery for this.  A chemo part is a small box that is fitted into the body and can be injected with chemotherapy.

Finally announced for the Gujarat company:

Ghanshyam Naik worked in the advertisement of Gujarat Natural Fertilizer Company a few months back.  This announcement was Ghanshyam Nayak's last announcement and at the same time Natu Kaka was last seen acting in front of the camera.

Played the role of Natukka and worked in Jethalal's shop Gada Electronics.

Actor Ghanshyam Nayak, who played the role of Natukka in the show, was diagnosed with cancer last year.  He was able to shoot only 4-5 episodes in a year and a half.  Although there was a salary credit in his account every month.  He was getting salary of one lakh rupees per month.  Also, he was paid according to the number of episodes he shot.