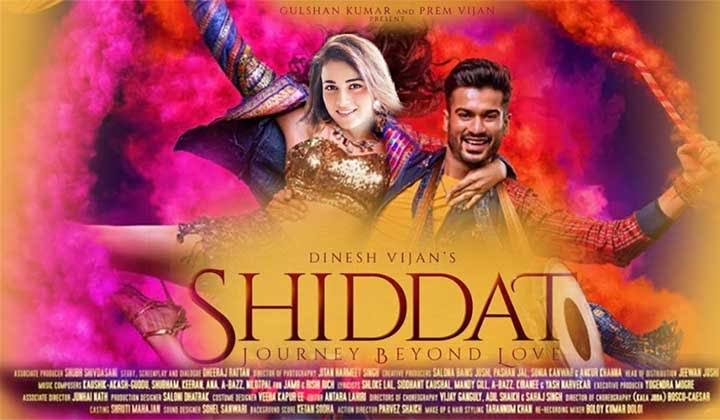 Shiddat is an Indian Hindi-language romance-drama film.  Directed by Kunal Deshmukh and produced by Dinesh Vijan, Bhushan Kumar and Ferozhi Khan under the banners of T-Series Super Cassettes Industries Limited and Maddock Films.  The film stars Sunny Kaushal, Radhika Madan, Mohit Raina and Diana Penty in the lead roles.  Shiddat was not released theatrically and was released on October 01, 2021 [India] through the streaming platform on Disney+ Hotstar. 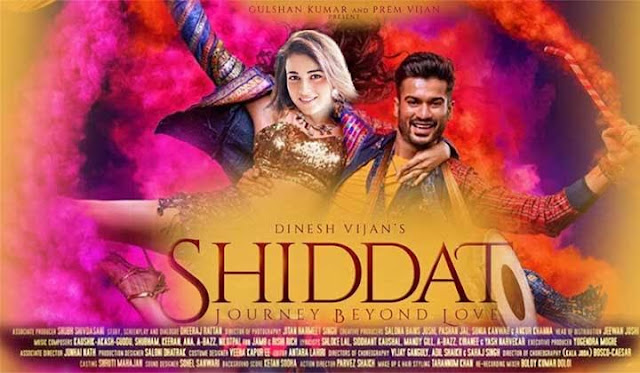 The budget of the film Shiddat has not been disclosed by the makers. but it could have been around 10 to 15 crores maximum.

The film Shiddat starring Diana Penty, Radhika Madan, Sunny Kaushal and Mohit Raina was released on October 1, 2021 on Disney Plus Hotstar.  Directed by Kunal Deshmukh, the film has been described as a love story.  Shiddat is produced by Dinesh Vijan and Bhushan Kumar.

Shiddat completed shooting in March 2020 and was targeting a September 2020 release, but the release was indefinitely delayed due to the COVID-19 pandemic.  The film Shiddat has music by Sachin Sanghvi, Jigar Saraiya and Gaurav Dasgupta where cinemagraphy is done by Amalendu Choudhary where Radhika Madan is with Sunny Kaushal, Mohit Raina is with Diana Penty.

Introducing Shiddat's full album Audio Jukebox.  Akhiyan Udiq Diya is a remake of Nusrat Fateh Ali Khan's 1993 qawwali song.  Sri Lankan singer Yohani, who rose to fame by singing the song 'Manik mage hite', made her Hindi film debut with the female version of the title track.  It was released on 28 September 2021 on his Youtube channel and in a short span of time attained the top trending position in Sri Lanka, registering almost two million views in a single day.

This Section May be Spoiler for you

The film begins with the wedding ceremony of Indian Foreign Service officer Gautam (Mohit Raina) and an ardent social worker Ira (Diana Penty), during which Gautam gives a heartfelt welcome speech impressing Jaggi (Sunny Kaushal).  Jaggi then creates a scene and is caught for entering the party with his friends.  Some time passes and Jaggi is shown crossing the border illegally with the intention of reaching London.  But as fate would have it, he is caught by his travel friend Bilal and taken back to the embassy where Gautam works.  Jaggi recognizes Gautam and explains to him that inspired by Gautam's speech, he has to reach London before Monday for his love.  And the movies go into flashback 3 months ago.

Jaggi was participating in a hockey match for his state Punjab in the All India Sports Competition.  There he and his friends decided to go to the swimming pool where the girls were training.  There he first sees Kartika (Radhika Madan) coming out of a pool.  There he asks his friend to click his picture in such a way that it comes in the background of the picture.  They start arguing and she says that she should not post the picture on social media.  But he posts that picture on social media, so to take revenge, Kartika goes to the men's changing room to make the video and take pictures of it, where Jaggi happily poses naked for him.

He then starts following her and tries to talk too.  He also helps her in her practice at her insistence.  One day, as he was giving her some advice to improve her time, Karthika pushes Jaggi into the pool and he starts struggling as he does not know how to swim.  Thinking that he is acting, Kartika ignores him and when he faints she leaves and then saves him from being guilty.  Then they start going out and spending time together, teaching each other their game (Jaggi Karthika teaches hockey and Kartika Jaggi teaches swimming).  They love an after party.  The next morning, Kartika's father calls her friend as she was not answering his calls and tells her that they are coming to see her compete.  After he wins, Jaggi comes to congratulate him.  There his parents invite him for Kartika's wedding.  After that, he tries to talk to Kartika and asks her about the marriage as to why she didn't tell him.  He says that it was decided before coming here and his consent was also present and he is sorry for it.  He panics and leaves.  Then at the party at night he tells her that he really loves her and tries to persuade her to invite him for her wedding. To silence Jaggi she tells him that if his feelings are true and genuine, then  He must come to London after 3 months, and if he does, she will annul the marriage.  That U.K.  K tries to apply for a visa but he fails to get one, so he tries to go illegally.

Hearing Jaggi's story, Gautam says that his darshan was just a welcome speech.  And then Gautam tells the story after his marriage.  Ira had an argument with her clients and she tells Ira all the time Gautam tells her that she does this. At their house they find a boy who is selling something and asking them to buy it.  Since Ira is a social worker, she takes pity on the boy and brings him food.  Gautam then tells Sarkar that the boy was a refugee and was living illegally.  Ira realized that it was Gautam who informed the government that they fought over it.  Then she leaves him saying that she needs space.

After hearing the story of Gautam, Jaggi has to be extradited to India.  Jaggi refuses to go to India and asks Gautam to help him reach London.  But Gautham refuses and Jaggi tries to run away, but is caught when he gets hurt while saving his partner Bilal.  Jaggi misses the flight due to some problem in the documentation.  Gautam has to keep Jaggi with him for 2 days till the next flight on Monday morning.  On the way home, Jaggi looks on the other side of the English Channel and asks Gautam what is on the other side to which Gautam Dover says.  Jaggi gets excited hearing this and laughs that he can swim across the ocean.  The two spend some time enjoying themselves and on the way Jaggi sees a dress and wants to buy one for Kartika.  There after 3 months for the first time he called her and asked her the size of her dress.  She was shocked to hear Jaggi's voice.  He says that he is in France and will try to reach there before Monday.  She doesn't believe him and thinks he is joking.  But due to the battery of Karthika's phone, they could not talk for long.  Next day Jaggi convinces Gautam to take a step for their relationship and calls Ira and tells that he wants to meet and she also tells him that she too wants to meet and talk.  In the restaurant, Ira seeks divorce and asks Gautam to sign the paper.  He angrily signs the paper and leaves.  On the way home, Jaggi sees a swimsuit and says that he wants to swim the English Channel wearing a swimsuit.  In a fit of rage, Gautam takes Jaggi to a swimming pool and keeps him swimming continuously because the English Channel is 20 miles long and crossing the sea through swimming is suicide.

Next day Ira comes to Gautam saying that she called him in the morning but he didn't, she learns that Jaggi did and he is missing from the house.  Jaggi also leaves a letter in which he says that "It is in the hands of God whether I reach my goal or not but if I don't try I will die" He then enters the sea to reach the UK on the other side  Is.  Here Gautam and Ira try to find him but they cannot find him.  Kartika is also worried for her as Jaggi calls her from a PCO and says that if he can swim till there then he is going to come for her.

Jaggi swims and swims as long as he can, resting for a while but then he starts getting tired and faints in the middle of the ocean.  Some helpers saved him.  Gautam tells Kartik that Jaggi is safe and tried to cross the English Channel to reach you.  Gautam asked Kartika that if Jaggi had crossed the sea, would she have broken her marriage?  She was confused and didn't really have an answer to the question.  Seeing the intensity of Jaggi's love, he fell in love with her.  He expressed his love to Jaggi on the phone and said that we are going to get married and will come to pick him up soon.

Seeing the love between the two, Gautam helps Jaggi to get a passport with a UK visa illegally.  When Ira asks Gautam why he is risking his career for Jaggi, he says that he crossed 6000 km across the world to meet this girl but Gautam walks 40 feet to stop Ira.  was not able to  One last time Jaggi goes to meet Bilal and tells him everything.

At the last minute when Gautam and Jaggi were about to board the plane, Bilal offers to reveal all the secrets to the government in exchange for a job, house and citizenship. He reveals Jaggi's identity and the police start looking for him everywhere at the airport. Jaggi hides under the plane where the tyres are locked during the journey.  It is very cold and as advised by his friend it will be freezing cold, he must faint, but he must also be awake before landing.  During his journey there Jaggi faints due to cold and dreams about him and Karthika but when the landing gear of the plane goes down he is unable to wake up and falls from the plane causing his death.

The police also found his body and the bag which they had handed over to Gautam aboard the plane.  He goes to Kartika, gives her the outfit that Jaggi had bought for him and reveals the incident.  The news she heard breaks her.

In the end it is shown that Gautam was telling Jaggi's love story to his friends as he was missing Jaggi and says 'Sab ki apni kahani hai apna apna love hai bas ek common factor hai shiddat' The common factor is love is intensity.

Hope you enjoy the article on Thalaivi: Budget, Box Office, Hit or Flop, Cast and Crew, Story, Reviews. Be sure to share with your friends and keep visiting PAGAL MOVIES to know about the Latest Bollywood, Hollywood And South Movies.