Hotstar bought 'Atarangi Re' in Rs 200 crore, Super hit even before its release.

Akshay Kumar is also a player of OTT: Hotstar bought 'Atarangi Re' made for Rs 120 crore for Rs 200 crore, super hit even before its release.

Akshay Kumar is also a player of OTT: Hotstar bought 'Atarangi Re' made for Rs 120 crore for Rs 200 crore, super hit even before its release. 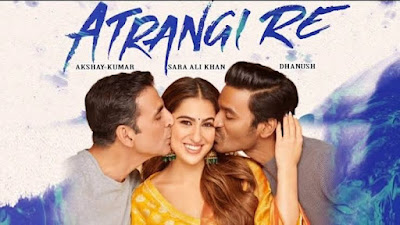 Akshay Kumar has also proved to be a player on OTT (over the top) after his smash hit 'Suryavanshi' in theaters. Akshay's new film 'Atarangi Re' is set to release on December 24 on Disney Hotstar. The film is the most expensive film ever made on a digital platform. The film has been bought by Hotstar for Rs 200 crore.

The deal with Atrangi makes it clear that digital platforms are willing to pay a hefty price to attract users once the theater opens. 200 crore has already joined the box office club before the release of 'Atarangi'. The film has a budget of Rs 120 crore and has sold for Rs 200 crore. That is why the film has made a net profit of Rs 80 crore.

Salman changed his mind, not Akshay

'Suryavanshi' proved at the box office that Akshay Kumar is a celeb and trustworthy actor and yet the makers did not release 'Atarangi' in theaters. This indicates that the digital platform has become the dominant force in the film business since the opening of the theater.

A good date could be found in the theater

Film producer and trade analyst Girish Jauhar said that if 'Atarangi Re' was released on any date, small and big films would make room. However, the makers opted for digital platforms, which means they are making more profit here. The film will now be purchased more aggressively on digital platforms. Will select the film carefully. The big movie will continue to be bought to get new viewers and retain existing users.

Producers got the treasure.

Yusuf Sheikh, business head of film distribution and marketing company Percept Pictures, said it was a prize catch to keep fans engaged during the Christmas holidays. It is important that users subscribe to the Big Stars movie. The digital platform will make aggressive deals in the coming days.

This is the decision of the makers

Distributor Akshay Rathi said that as a theater operator, he would like to see films like Akshay Kumar's and makers like Anand L. Rai released in theaters, but each filmmaker has his own business decision. They respect the decision of the makers.  There are many film line-ups in the coming year and that is why the theater will continue to get the film. It may be seen that after the film is made, it is realized that this film is not made according to the scale of the theater and that is why it was decided to release it on a digital platform.

Sanjay Ghai, a North Indian film distributor and exhibitor, said it could take months to find good dates for a film release, but producers are looking to make a profit immediately if they get a good deal on a digital platform.

Action movies do business in theaters according to the content. 'Suryavanshi' running well.  It is hoped that 'Satyamev Jayate 2' will also run. 'Bunty Aur Bubbly 2' doesn't work because it doesn't have action. This may apply to 'Atarangi Ray'. Akshay has a lot of fans in North India, but here he is chosen as an action hero.

Akshay's 'Suryavanshi' has become a super hit.  Anand L. Rai, on the other hand, is looking forward to commercial success. His film 'Zero' was a superduper flop. Despite having Shah Rukh, Katrina and Anushka in the film, the film could not be a hit.