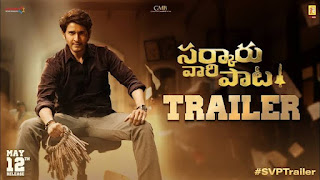 Sarkaru Vaari Paata was initially scheduled to release on 13 January 2022 but was deferred due to the pandemic and production delays. It is now scheduled to be theatrically released on 12 May 2022.

Reportedly, Mahesh Babu has been paid a whopping 70 crores as his salary for Sarkaru Vaari Paata. What’s more surprising is that the film’s budget is 60 crores and one can see that the actor has got 10 crores more than the cost of the film. That's crazy star power!

The music is composed by S. Thaman, collaborating with Mahesh Babu for the fourth time after Aagadu, Businessman and Dookudu and with Parasuram for the third time after Anjaneyulu and Srirastu Subhamastu. The audio rights were acquired by Saregama.

Sarkaru Vaari Paata is a story about Mahi (Mahesh Babu), who believes that financial discipline is a must have quality in everyone. What happens when he encounters Rajendranath who doesn`t respect money. Kalavathi (Keerthy Suresh) is the love interest of Mahi in this action drama.

In the story, Mahesh Babu works as a bank manager and will be out on a mission to bring a top industrialist who escapes from the country after committing a 100crs financial fraud. Inside talk is Mahesh will be romancing Keerthy Suresh in the film for which music will be scored by S Thaman.