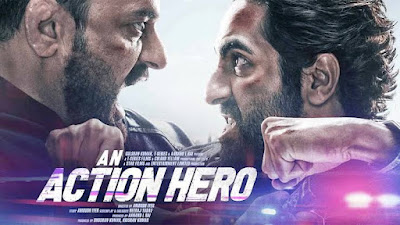 An Action Hero is an action drama movie written by Neeraj Yadav, while the direction was done by Anirudh Iyer. The movie stars Ayushmann Khurrana and Amro Mahmoud in the main lead roles, along with Alexander Garcia, Mohd Talib, Bogumila Bubiak, Hiten Patel, Mirabel Stuart, and many others have seen in supporting roles.An Action Hero movie is all set to release in theaters on December 2, 2022.

The Film Was Announced in October 2021.Film's trailer was released on T-Series' Youtube Channel. The film was theatrically released on 2 December 2022.

An Action Hero movie is made with a budget of 40 crore Rupees and it is a high-budget movie.The budget of the film was spent up to ₹20crore in production cost and the cost of printing and advertising of the film has been around ₹20 crore.

With a budget of 40 Crore, An Action Hero has managed to collect up to 14 Crore, and has turned out to be a huge flop.

The cinematography was done by Kaushal Shah, and it is edited by Ninad Khanolkar. Tanishk Bagchi composed the music for this film. The film is produced by Bhushan Kumar and Aanand L. Rai under the T-Series Films and Colour Yellow Productions banner. 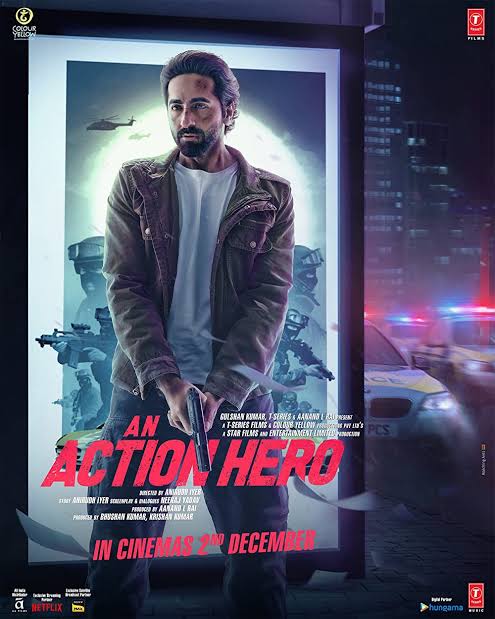 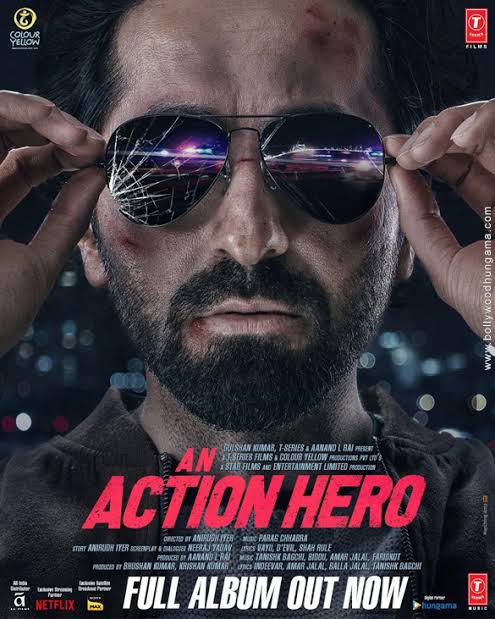 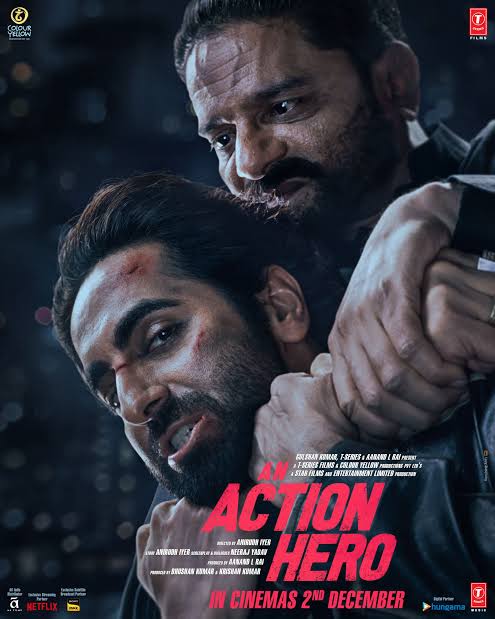 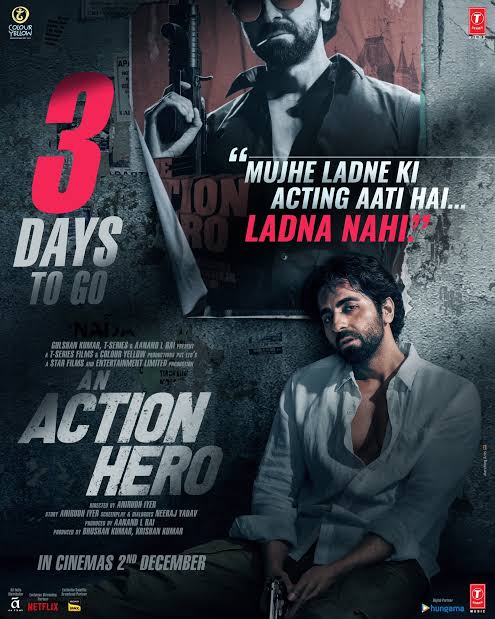 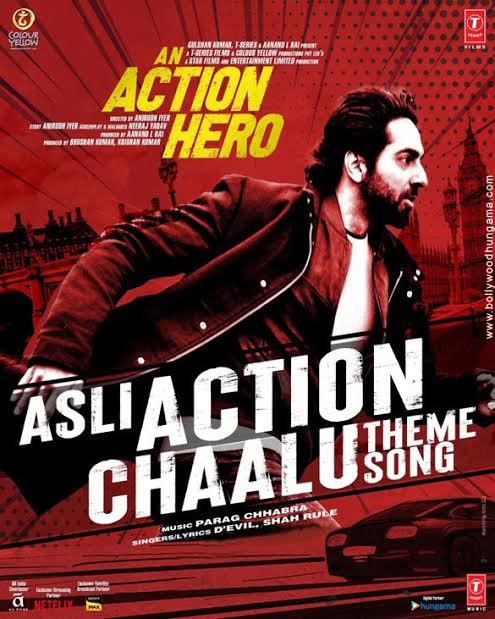 The film starts showing some R.A.W. officers entering a an investigation room, where they find a handcuffed maanav exercising. As the enquiry begins of how maanav lead to katkar, he reveals that the road to katkar goes through Vicky and bhoora solanki and then we see the start of the movie in flashback where, Superstar Maanav is a popular actor, known as a leading man in action films. For his upcoming film, he heads to Mandothi, in Haryana. Vicky Solanki,an aspiring Politician who is currently contesting in local election wanted to meet and greet maanav with his friends, However, Maanav does not pay heed because of his busy shooting Schedule post that when is about to meet vicky, he is distracted by xelivery of his new mustang Car and goes for a long drive. However, An enraged Vicky follows and manhandles Maanav. Maanav gets enraged, and pushes Vicky, who lands on a stone and gets hit in the head and neck. He dies on the spot.

Frightened, Maanav escapes from the village absconds to UK. He does not realize that Vicky's brother, Bhoora Solanki, a municipal councillor of Mandothi, has also reached UK to hunt him down. His Mustang's side mirror is found in the crime scene, in Haryana, and the police soon conclude Maanav's role in Vicky's murder. Maanav's reputation is degraded and his films are boycotted. The news has already reached in UK, and Maanav is forced to hide himself from the UK police. While returning from the market, Maanav finds Bhoora at his house who has killed to british officers , but he manages to escape and tries to seek help from his lawyer, but he do not respond. Bhoora confronts Maanav, who tries to prove his innocence, but Bhoora does not listen and tries to kill him, but Maanav manages not only to over power him but also escape by locking Bhoora in the car's decklid.

Upon preasuring his manager for help Maanav arrives at Blacksmiths to meet Lawyer and Fixer, but Bhoora arrives and kills him too and when he tries to kill Maanav Kaadir arrives to Abduct Maanav, but he absconds again with with bhooras help but leaving him behind again, while Bhoora manages to learn where Maanav would be taken, and he holds Kaadir hostage. Meanwhile, Maanav gets fed up of hiding, and surrenders himself to the police with evidence of bhoora killing british police officer in his house, but Masood Abraham Katkar, India's Number one Don who was taunted by Maanav as irrelevant, abducts him.Maanav is taken to a function hosted Masood where he has to perform in exchange for freedom.

Bhoora after killing kaadir in the same buildings parking , arrives and disrupts the function, but gets caught by masood men. Upon Interogation of bhoora and maanav masood indirectly advises bhoora to kill maanav when his image with katkar is viral on media but just as bhoora is about to shoot maanav, he manages to deflect the revolver and instead katkar gets killed. Now maanav is confronting bhoora for this mistake and giving him taste of his own medicines and shortly katkar's men arrive to koll them both and a gun fight ensues. Maanav and Bhoora manage to defeat Katkar's men. Maanav forms a plan to make a deal with the Indian Embassy to tell them that the government used Maanav's situation and assigned him for the mission to track and kill karkar, thus saving him from jail term. However, in another memory lane flashback , it is shown that bhoora who realized at day one that maanav was innocent still wanted to kill him for the sake of his ego and verbal.commitment and Bhoora refuses to spare him and wants to kill Maanav. With no choice, Maanav kills Bhoora and his plan becomes successful. Maanav regains his reputation and returns to India, where he is surrounded by his fans for an autograph.maanav Indeed Becomes from a reel to a "Real Action Hero"

Hope you have liked the information given in this article about An Action Hero Movie Budget, Box Office Collection, Hit or Flop. Do share it with your friends. Keep visiting Pagal Movie to read the latest about Movies, Celebrities, TV shows, and web series.